Then onto my final journey in China back to my starting point, Beijing. It was quite a journey, one of the longest I took and gave me an opportunity to meet more people, plus a magnificent night on the Great Wall. 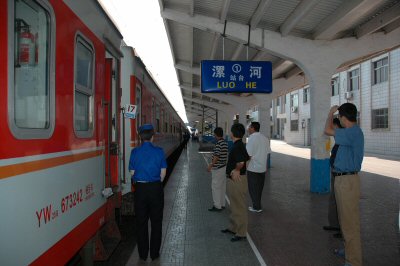 The last leg by train, a brief stop at Luo He Station

It was a great train journey, about 28 hours in length leaving early evening and arriving at about 11 in Beijing. Not quite the standard of the train from Beijing to Chengdu, but not bad. I also was in good time getting to the station so not much of a rush in the end. 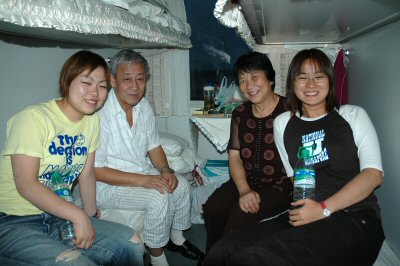 Some friends I made on the train

The two girls were studying in Japan (one from Singapore) and spoke English - a great relief always. Very interesting to chat to as the Japanese girl had faced some open hostility to her nationality which Ii hadn't expected. The Singapore girl spoke Putonghua as well so we were able to have a chat with the older couple which was a great insight into the older generation. 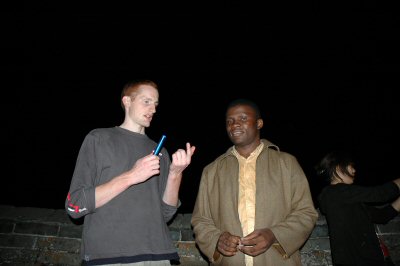 On the Great Wall with my old CU president

I returned a day earlier to Beijing to achieve something I'd heard was possible - to sleep on the Great Wall. By 'coincidence' Dave, my old CU president who'd kindly invited me to stay on my second night, told me of a trip that was going to the wall to sleep, so I signed up :) 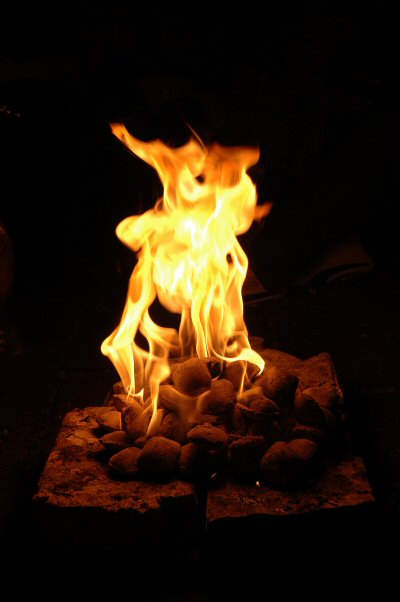 Flames licking up from a fire

This picture has no relevance to either the picture above or below, ie. we did not light a fire on the wall. Honest. 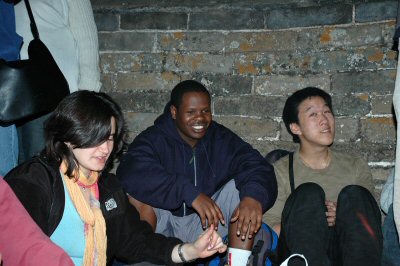 New friends made on the Wall

Going with a group of people I didn't know gave plenty of opportunities to make new friends. The coach that took us drove incredibly slowly and about doubled to journey time meaning we got there in the dark to chose our spot. 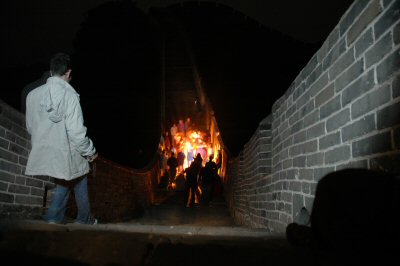 Hmm, this could be incriminating...

Like I said, we didn't light a fire, perhaps this was the light of the Lord. Never the less we danced the night away in celebration to the God of this World. Marvelous. 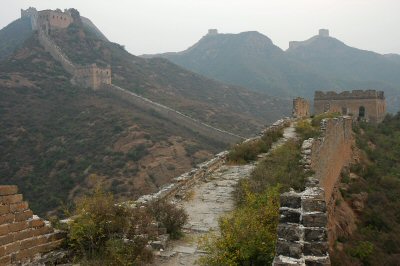 The morning after the night before

The location was near Simatai and how impressive it was, beat the pants of Badaling with a wonderful mix of utter decayed wall with some respectfully rebuilt sections. Much was rather a scramble to traverse and to see it really snaking off into the distance was amazing. 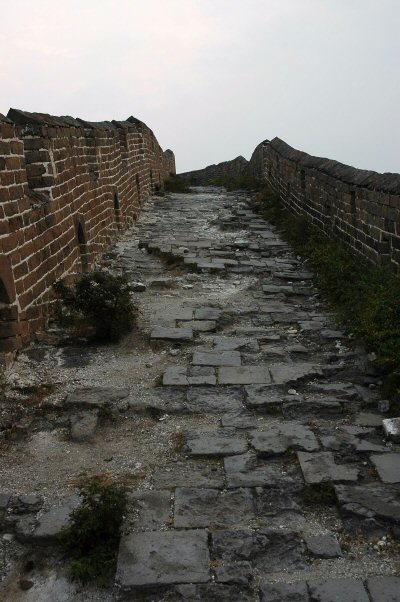 The steepness of the wall going straight up and down successive peaks defies belief. It made for some quite spectacular walking and a desire to explore more. 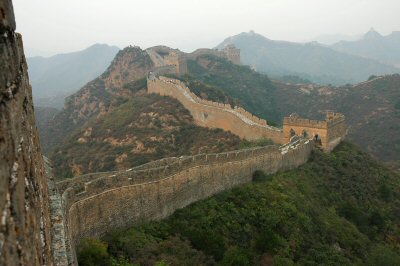 More of the wall 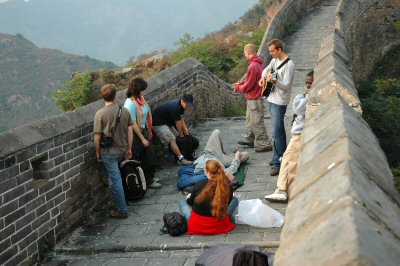 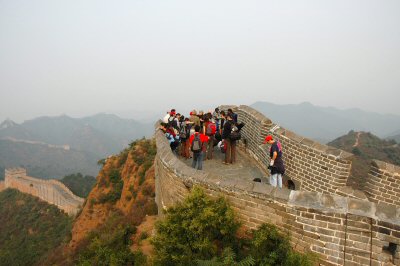 It was a shame to have to leave he following day, it is possible to walk an entire 10KM section of this part of the wall but we had to get back. Still, next time I'll walk it :) 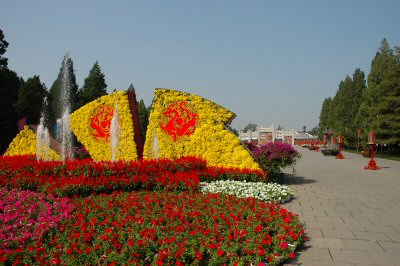 Back in Beijing preparations were underway for the Moon Festival, happening on the day I was to fly out - :( Red and yellow flowers were appearing everywhere and dignitaries were visiting the sights, sadly at the same time I was trying to do the same leading to a bit of arguing in Chinese - something I appear to have perfected without realising it! 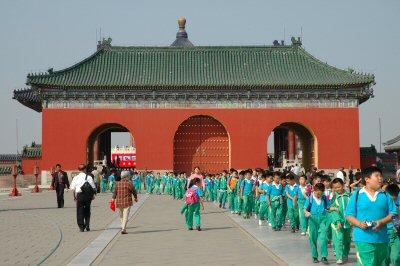 Despite the near universal one child policy there are still loads of children, this is just one school trip and I dar say not the whole school either. Just imagine what it would be like without the policy! 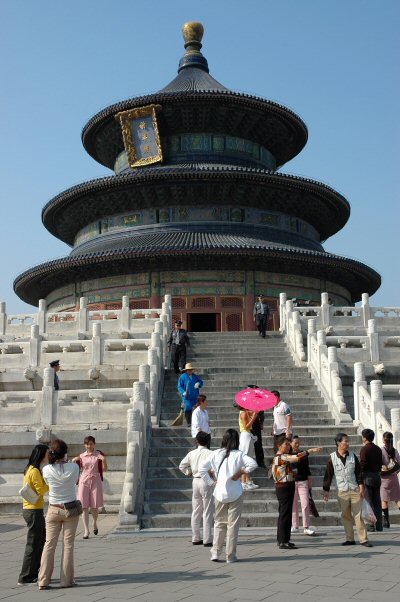 You can see the security guards approaching to clear us out so the dignitaries could enter in peace. Having just paid 30 kuai for the entrance I was in no mind to leave, and neither were anyone else. I returned to the ticket booth to complain, much madness ensued in which I was finally escorted off the pathway (as everyone else had been) to gather with other disgruntled tourists and locals. I'd raised the interest of some Chinese visitors who the accompanied me back to the booth to really complain Chinese Style! Eventually wangled the ability to give my ticket to a chinese girl and get here into the temple on my used ticket - success. (PS if that doesn't make much sense, then fear not as it didn't at the time either) 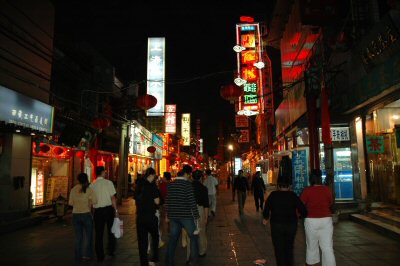 My final day was spent shopping for all the things I'd seen on route but had resisted buying beforehand. 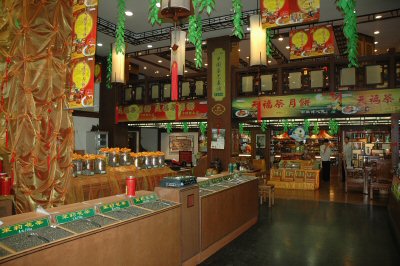 This was the teashop I'd visited on my first night (of which I'm still drinking right now!). I returned to sample their wares and had much fun purchasing a great deal of tea. China Rocks! 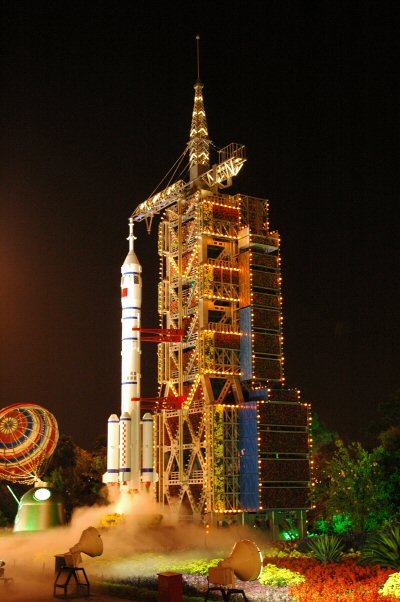 For the Moon Festival Tian'anmen had been completely redesigned and was unrecognisable with fountains, rockets and entire hillsides seething with plant life. 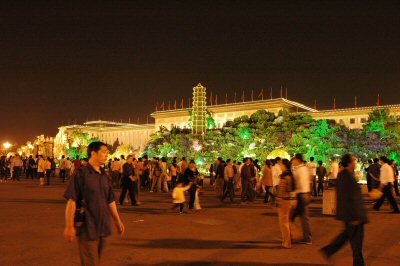 The west side had some landscaped hillside thing

I had a reason for going to the square and that was to repeat an act that my Grandfather had done about 15 years previously. When he visited with a group of Christians from England they sung 'O For a Thousand Tongs' so with the words copied of the web into the back of my Chinese Bible I wondered the square singing this song, quietly of course as the place is rather more heavily patrolled nowadays. 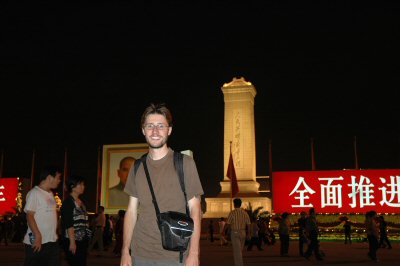 See I really was there 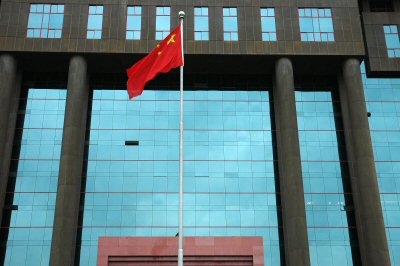 Flag flying for my final farewell

The morning of my departure I decided to walk from my youth hostel to the coach station to get taken to the airport. After walking everywhere else in this country I thought it sad to catch a taxi on the last day. I was quite a peaceful walk past some impressive buildings flying the Chinese flag to celebrate the Moon Festival. 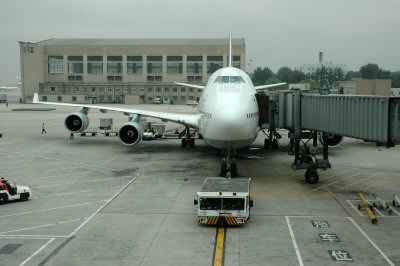 Mongolia from the air

Rather a nice flight back crossing over Mongolia which looked like a fun place to visit. So many people that I met said that it was the most impressive place that they'd visited. Perhaps next time, along with Tibet - as long as I get there before the railway does. 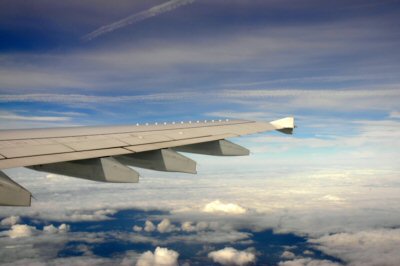