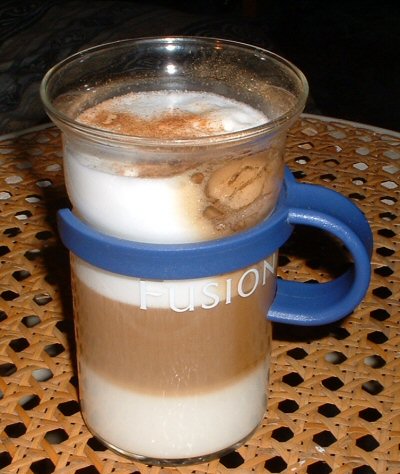 So my coffee making skills have slipped somewhat in recent times, but I've made the move from ground coffee to beans - oh it is so well worth it I can tell you :) At the same time Iv'e also moved completely to decaff (and at the same time partly back to instant - it's all a bit funny really) Let me explain:

So I came to university from a full caffine, full cream, instant coffee upbringing (with an occasional ground coffee on Sundays) and I used to like my coffee weak - think gnats piss. Then I discovered freedom at university to buy, eat and drink what I liked, so out went the instant and incame the ground coffee - fairly traded of course. This went down very well mith me and one of my hall mates in particular (we used to have a nice coffee and watch Fraiser while everyone else went out to get sloshed).

Over the following years I guess my consumption increased slightly, not to the 7 cups a day that I hear of, but at least three, perhaps four, and not the smallest of cups either. I'd also moved away from the gnats piss I used to take, to full strength. The effect was not really noticed untill I found in my final year that I was suffering from constant daily headaches, a combination of grief, stress and a tence living situation. I beacme aware that the after taste of strong coffee lingered a bit to long, and the seemed more distracting when I had a headache.

So early in 2004 I decided to quit coffee for a month or so. I'd been cutting back a bit for a few weeks but when I actually stopped drinking any coffee I went down with a pretty nasty five-day migrane, perhaps my worst ever. Tasty! I held out for perhaps two months but which time the headaches had not ceased, so the link was not apparent.