As of December 2010 a search for nick bailey on Google finds me in the number one spot. Excellent. Since I first begun googling myself I've come up against increasing competition. At first it was only the two Nick Bailey's from Classic FM and Eastenders, but then a new Nick Bailey (well, 'Nicky') started playing for Middlesbrough and he was pushing me out. Thankfully I've beten him back in recent months to regain the top spot. I'm even above Wikipedia which is nice.

But searching 'nicholas bailey' is still not such good news. When I first made this page I managed to make it to second, but now I'm only just scraping in the first page in tenth. And that is only thanks to this particular page, not my main site. It would be nice to be a little higher so I think I need to start linking this page from some of my others to raise it's profile. Or just call myself Nicholas more often.

So if you've just arrived on a Google search for 'nicholas bailey' then may I extend my virtual hand and say hello, I hope I was the Nicholas Bailey you were looking for. And if not then please stick around and find out a little more about this Nicholas Bailey.

This is worse news again. Previous I had also topped the 'nicholas bailey' search with a photo from SCM. This has now slipped far far down and the photo of me below is only just hanging in page one at number twenty. I found that the meta data for the photo below was calling me nick, and as a result this photo appears number one of a search of 'nick bailey'. 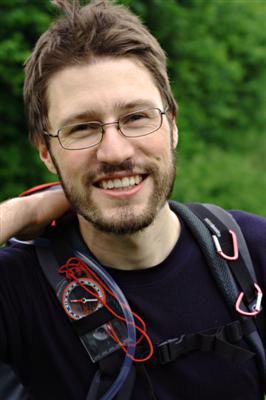 and this is also me:

Both these photos (are the same, yes) were taken by my good friend and accomplished photographer Dr Emery Ku on a SUHC day walk in 2006